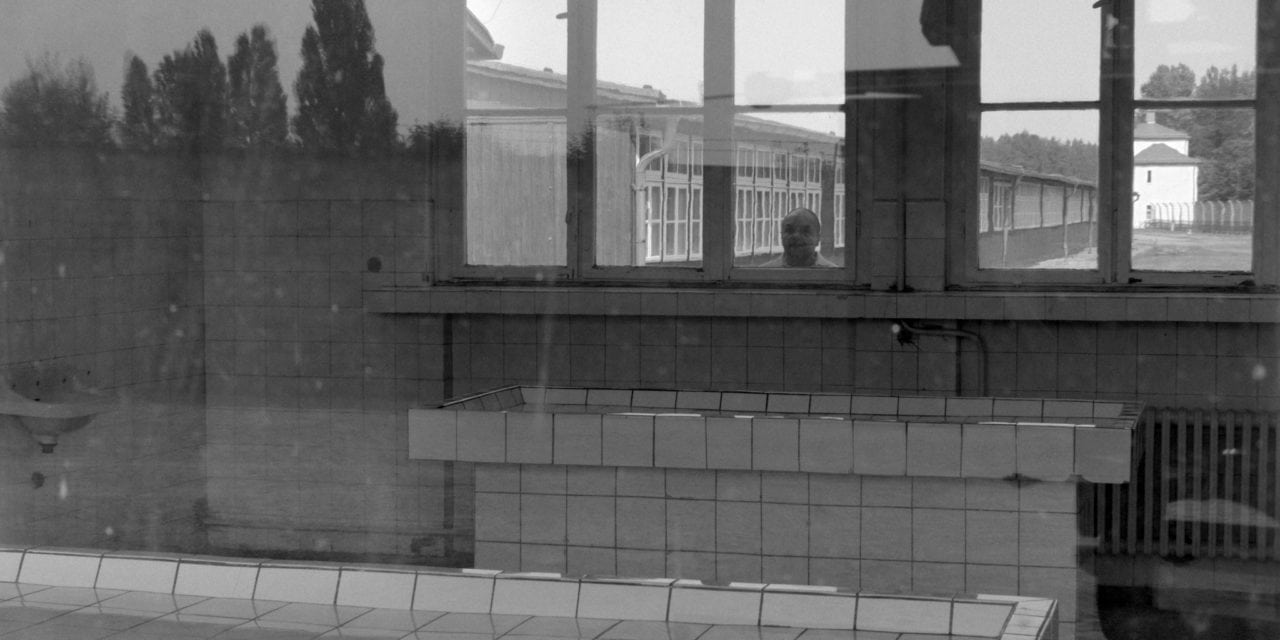 This year’s Documentary Fortnight program at the Museum of Modern Art (MoMA) examines justice and, particularly, how we interact with the past. Can the past ever be adequately represented? What are the uniquely cinematic means to do so?

These are the questions that come up urgently while watching Sergei Loznitsa’s latest documentary, Austerlitz (2016). The title refers to the work of German writer W. G. Sebald. Upon examination, however, Loznitsa’s connection to Sebald appears tenuous. Where the writer is haunted by how unrelated physical markers of landscape or architecture can nevertheless be imbued with the sinister aura of the past, Loznitsa’s focus on the concentration camps goes beyond such psychic and cognitive mapping. It is not that random structures evoke sinister associations; the camp buildings, bricks and windows like any other bricks and windows, were actually once witness to unspeakable suffering and cruelty.

Loznitsa’s film is profoundly disturbing, for reasons he probably did not intend. Loznitsa takes us to concentration camps in Germany, and shows us tourists—with their usual technological accouterments, such as video and photographic cameras—strolling around the grounds of the camps. The film has been coined as a meditation on the nature of memory. But the word “meditation” makes me ask where, in Loznitsa’s film, is the evolution of thought, manifested by a turn of a phrase, a mental or psychological progression. For sure, Loznitsa feels deeply about the camps, yet he does not manage to transcend the obvious conclusion: images (aka representation) do not guarantee empathy, or understanding. Representation fails. We forget, doomed to repeat the past.

This is a somewhat familiar, albeit simplified, premise of Susan Sontag’s writings on images and war, and Loznitsa’s film does little to push beyond it. The one indication of this is the fact that once we’ve seen about ten minutes of the film, we have, in a sense, seen it all. One could argue, of course, that Loznitsa’s aim is accretion, and cool observation. But it isn’t always as illuminating as one hopes.

The film is at times so flat that I watched it mesmerized, and frightened. If the point is that the camps allowed the most terrifying de-individualization, why now look at the tourists visiting them—human beings, after all, coming to terms with unspeakable facts—as if they were insects under a microscope? Perhaps Loznitsa’s distanced lens is a Brechtian device, meant to hide his outrage, when faced with questions, such as: Why are these people reaching for cameras? Why can’t they refrain from taking a picture of the infamous sign, “Arbeit Macht Frei”? There is a bitter irony here as well, and Loznitsa, whose My Joy (2011) was far from bliss, and whose sardonic view of life enthuses his fiction films effortlessly, is clear about this: his own actions, as filmmaker, mirror those of the tourists. But the film also implies that Loznitsa has a higher purpose, which is to question, and, by extension, to judge.

My reservations are no doubt informed by my being Polish, and by my visits to concentration camps in my youth and later, as an adult. Yet I find it hard to believe that the shock of recognition—at the pile of paled human hair, or a stack of deformed children’s shoes—was mine alone. Loznitsa shows us children and young wandering and observing, yet registers no flashes of grief, or fright. There is no singular interaction with what’s being presented, only the faceless crowds. I  realize that my own experience was contextualized by family stories, of the Warsaw Uprising, the horror of first the war and then of the Soviets taking over the devastated city, stories of raids, transports, and murder. Yet watching the young strangers’ faces I am incredulous that the shock waves don’t come for them as well. 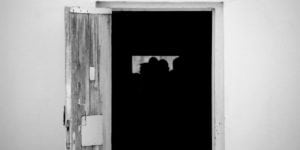 n place of silence, there is the incessant noise of crowds. Is it because film cannot enter into that sacred space? But then how can we move beyond the recycled truths about media-mediated reality? Perhaps I’m demanding too much, asking that Loznitsa resist or counter-balance his most immediate take on things. A gesture that Errol Morris makes in his book, Believing is Seeing: Observations on the Mysteries of Photography, defending the Abu Ghraib perpetrator, Sabrina Harman. We may disagree heartily with Morris’s explications of how the smile that Harman flashed for the camera, while standing next to a prison inmate, was a social pose (in other words, how even a selfie can be self-defensive, meant to deny what is really happening with us emotionally in the moment), but we can’t deny that Morris makes an attempt to weigh the evidence. To question it. To investigate.

The consummate chronicler of the Holocaust, Claude Lanzmann, eschews reconstruction, seeing historical sites as necessarily fraught: We cannot make Disney-hyper-reality out of real sites where extermination took place. Loznitsa acts as if he forgot that if the tourists treat the sites too casually, it is because walls don’t speak, they can’t convey the truth. Loznitsa reproduces the haunted aura by muting or outright silencing private experiences, yet deems the tourists’ reactions inadequate. Perhaps we ought to ask then: What’s missing? Are the means at our disposal to represent—or rather, to signify—the past hopelessly insufficient? Those who built the camps knew what they were mirroring them on: the industrial complex. Its efficiency, the assembly line, ruthless calculations, all of this to give an appearance of “normalcy.” A sickening word, and yet it is that: a death factory. What do we then require of the men and women, who pass through its halls, where inmates once lay on mats or floor, while they listen to their audio guides?

To be sure, some of the script of the tour guides lacks decorum. “Now let’s take a look at the gas chambers,” sounds as flat as if they were strolling through an ordinary museum, about to gaze upon a classic Greek vase, or such. Yet Loznitsa’s judgment that people who visit the camps now do it with a “different purpose”  (The New York Times) than those who did so in the 1960s—because they have forgotten, and so, as Loznitsa says, “Goebbels wins”—does not jibe with my own experience. I was in Germany in the very early 1990s, right after the fall of the Berlin Wall. The German youth I met then understood history painfully and viscerally, and wanted us, Poles, to know how deeply sorry and ashamed they felt. One could counter that those German youths are now in their thirties and forties, and that today’s young feel no guilt; yet the Germans I knew are also now parents t, and there is no reason to believe that they don’t wish to pass the history lesson on to their children.

And yet, watching Loznitsa’s film, I do detect a profound and ominous tone—it makes me worry that what he is really showing us how Europe, as a whole, is changing dramatically.  And that, in this sense, he is at least partly right. There hangs over the film an unspoken threat of resurging Neo-Nazism. What Günter Grass so painfully described in his novel, Crabwalk, in which a young man, spurred on by fascist ideas, commits a heinous crime. Europe is going through a bout of virulent populism. Poland has not been immune to it, neither has Ukraine. And so, perhaps now more urgently than ever, we ought to ask: Are we all guilty of forgetting? 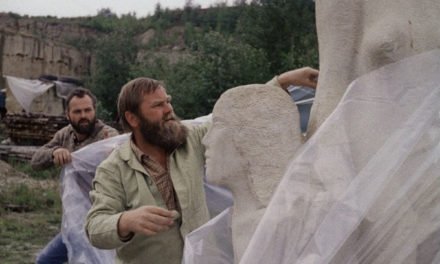 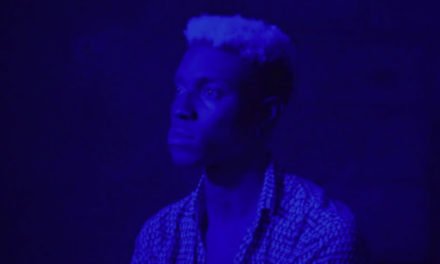 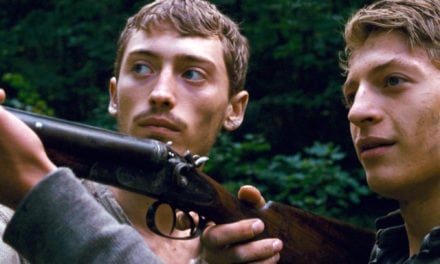