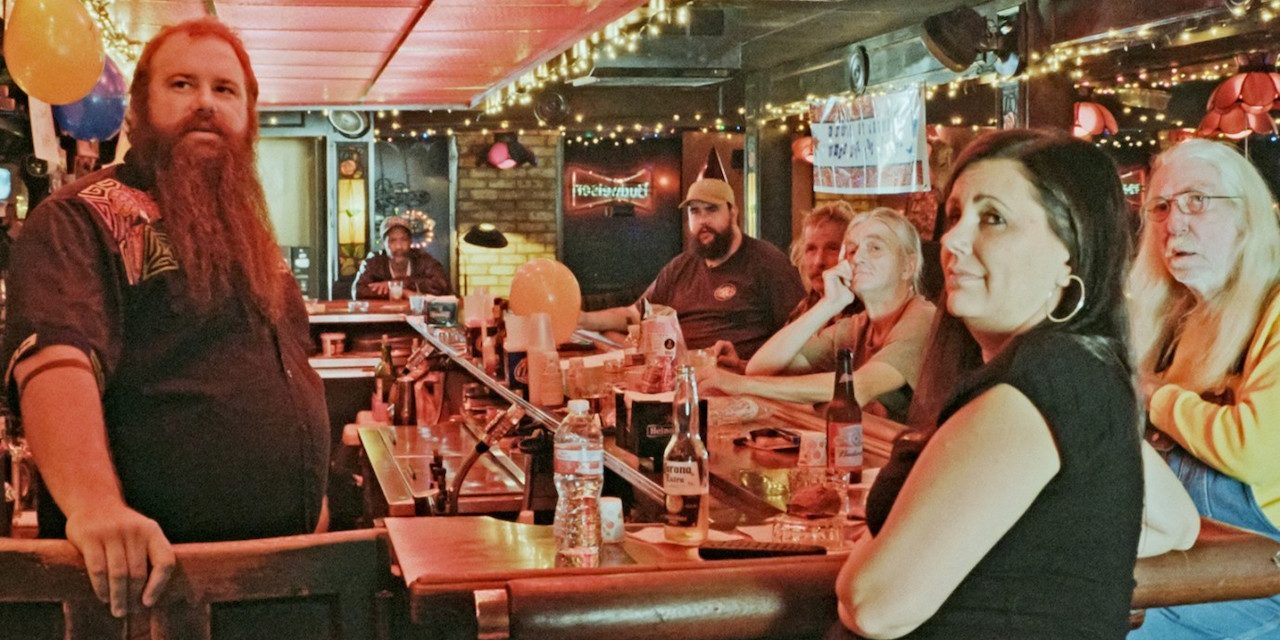 If you asked me to draw a home, I would probably find myself using the same basic method and form as when I was a child — a square, with two smaller squares within it for windows, a rectangle for a door, and a triangle-shaped roof. In this two-dimensional world, there would always be the assumption of four walls around the people inside, spaces to walk through or peer in and out of, firm and unwavering shape and structure to house the lives lived there. How we imagine our own ideas of home and what this forges within our own identities has long been the subject of artistic work across a variety of mediums, questions that exist in a dichotomy of universality and individual experience. Home is a concept we all understand, despite our vastly differing experiences of it. It is a great privilege to know a home of peace and safety, and therefore it is necessary to reclaim spaces for those for whom this is not a reality.

The British social scientist and geographer Doreen Massey wrote in her book Space, Place, and Gender that, as shown throughout history, groups:

seek the identity of a place by laying claim to some particular moment/location in time-space when the definition of the area and the social relations dominant within it were to the advantage of that particular claimant-group. […] All of which means, of course, the identity of any place, including that called home, is in one sense forever open to contestation.

Those with an advantage — power, money, often both — can seize space and create home on their own terms, Massey suggests. But if space is “open to contestation,” fluid, and not permanently fixed, how can groups take it back? Two non-fiction works at this year’s Berlinale examined methods of reconstructing home in the United States, and revealed themselves to be powerful films about liberation and reclaiming space by those who are often denied it.

The first was the latest project by Bill and Turner Ross, two brothers who have explored the landscape of contemporary America in various iterations since their 2009 debut 45365 and were described by Sight & Sound as “two prodigies of American documentary’s digital revolution” in 2017. In Bloody Nose, Empty Pockets, which premiered at the Sundance Film Festival before Berlin, the directors explore life in a Las Vegas dive bar on the eve of its closing as its regular drinkers look for somewhere new to call home. There’s Michael, the alcoholic mainstay; Shay, the no-nonsense, sought-after bartender; John, an Australian expat who takes just a little too much acid, and a whole host of other day-drinking comrades who wander in and out of this favored establishment. They’ve found community there, friendship and warmth, often as well as a sofa to sleep on or a sink to bathe in. Personal histories are offered over with a shot of whiskey to wash them down with.

Except that, the Ross brothers have worked meticulously hard to build and stage what appears to be an authentic document of a time and place. The Vegas bar is actually in New Orleans and the cast of customers is just that, a cast, selected by the directors to carry out their theatrical experiment. Their approach, however, has been made clear in the interviews they’ve carried out at festivals so far, that these cast members do live the lives of their characters too, and that the crossover between reality and archetype was crucial for the harmony of the bar setting and the narrative. What is usually difficult to define when it comes to non-fiction cinema is compounded here — this is a construction of the real, with no attempt to hide its artifice or the structure holding it in place. Setting is crucial here though to the wider conversation the film evokes, and exterior shots of the real Vegas are scattered throughout the film. A recurring news report appears on the TV with updates on a local traffic jam known as “Carnado.” Either side of this, talk show hosts discuss elaborate ocean cruises and the closing of the world’s largest souvenir shop — the capitalist excess of the outside world depicted through the flat screen gateway of the television. The early shift bartender remarks on the closing of the bar that it’s “probably gonna turn into a CVS anyway,” while on Jeopardy contestants don’t know the name of the USA’s largest Native American tribe, the Navajo.

Ideas of construction and contested space present here are just as important as the expression of found community and friendship. Through resonant television programming inside the bar and inserted chapter titles set against backdrops of images of the crumbling, desolate town, the Ross brothers keep a firm eye on the conditions of life for the disparate group of drinkers outside their sanctuary that have led to the bar’s homeliness. With their city under contestation from various forces, as both the highway construction causing the so-called “Carnado” and the sheer fact of the bar’s closure would suggest, the community have claimed a space for themselves that is to their advantage — a space to drink freely with friends who understand them and who have shared similar life experiences. Still, this undeniably participates in and is bound to the history of the country (and many, many other parts of the world including, most explicitly perhaps, Britain, where I call home) where space has been claimed and contested without warrant. 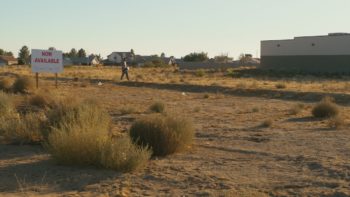 From the Navajo to the Mojave in another film featured at the Berlinale: Victoria, a 70-minute essay film from directors Sofie Benoot, Liesbeth De Ceulaer, and Isabelle Tollenaere. In the desert lies California City, an experiment of construction in some ways like the Ross brothers film, built by an eccentric and ambitious developer in the 1950s. The developer’s aim was to build a new city to rival Los Angeles, and although the area is technically the third largest city in California by land area, it boasts a population of just a little over 14,000. One of those residents, Lashay Warren, is the subject of Victoria, which follows his new life in California City with his family having recently left an impoverished neighborhood of Los Angeles behind.

Whatever the developer of California City hoped to create, he fell far short of even the small community constructed in Bloody Nose, Empty Pockets, but what Warren himself achieves feels even more pioneering. He studies for his high school diploma while participating in environmental conservation services as part of the Kern Service and Conservation Corps, working alongside other young people to rebuild this unfinished city. They scrape across the dry desert land to mark out the roads and plant wooden posts with spray-painted street names day by day, a far cry from the city lives they used to know. Combining videos recorded by Warren on his phone, virtual city footage via Google Maps, and the work of the directors, Victoria documents and constructs Warren’s city as he builds it for himself. Images are narrated by Warren’s own testimony, both through recorded conversations and an overlaid narration from a diary he kept, and so the film itself feels like it belongs to him as well as the space it explores. In the film’s most explicit moment of reclamation, Warren carves his name into a large rock and announces the name “Victoria” as his suggestion for his new home.

What both of these works engage with is not just the claiming of space, but the method by which it can be achieved. Whether virtual, tangible, “real”, or an obscured fiction, there is an acknowledgement of a time and a place belonging to a community that has chosen to build upon it. In these films the communities are of working-class Americans and under-served youth of color and, while these groups are by no means presented as monoliths, there is an attitude of resistance to the power dynamics and systems of oppression that would often hinder such people from claiming space for themselves. These options of creation and construction feel both liberating — an open opportunity through filmmaking that others can seize to build communities and spaces of their own, on their own terms — and are a stark reminder on the foundations upon which America has created its sense of home for centuries.

Bloody Nose, Empty Pockets and Victoria both screened at the 70th Berlinale. 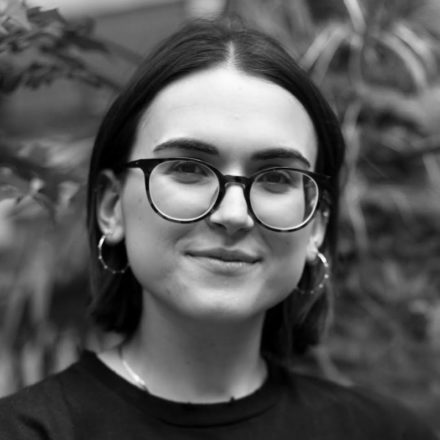 Caitlin Quinlan (@csaquinlan) is a film writer and programmer from London. She is a regular contributor to Little White Lies and Sight & Sound and organizes female-led film events with the Bechdel Test Fest collective. 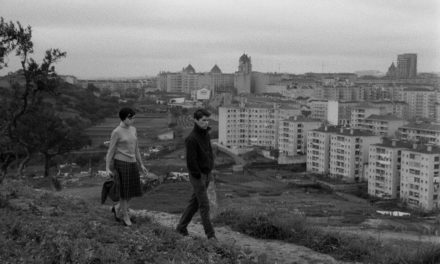